The Weekly Standard: Awake and Sing with The Ohio Light Opera 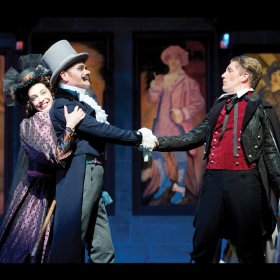 No works of the late Victorian age are remembered with more affection than those of Gilbert and Sullivan. Yet it’s not been easy to keep those masters of light opera on the professional stage. Since it closed in 1982, the D’Oyly Carte Company, the legendary troupe that staged Gilbert and Sullivan’s Savoy operas, was revived in 1988, and again in 2013​—​each time to limited success. Today, there is no Mikado, and certainly no Ruddigore, on or off Broadway, or playing in London’s West End. In addition to other challenges, the Victorian bards now face the perils of political correctness: Just a few weeks ago, the New York Gilbert and Sullivan Players canceled their planned production of The Mikado after accusations of racism.

Yet here in Wooster, Ohio, a small college town an hour south of Cleveland, the Ohio Light Opera (OLO) just completed its 37th summer season, offering not just Ruddigore, but The Yeomen of the Guard, as well as Kurt Weill’s One Touch of Venus and works by Cole Porter, Lerner and Loewe, George and Ira Gershwin, and Franz Lehár. The repertoire hints at its range and dedication to lyric theater in the English, Viennese, and American traditions.

Since 1979, the Ohio Light Opera has produced a remarkable 128 titles, 76 of them European operettas, many rarely if ever performed elsewhere. While reviving 31 titles since 1999 alone, it has continued to center its season on Gilbert and Sullivan, performing H.M.S. Pinafore 15 times, Iolanthe 8 times, and even the relatively obscure The Grand Duke 3 times. If operetta has a home these days, it is not in the cities and lands of its birth; it is on the edge of Amish country, in Freedlander Theatre at the College of Wooster, home of the Ohio Light Opera.

Read the full article on the Weekly Standard website…